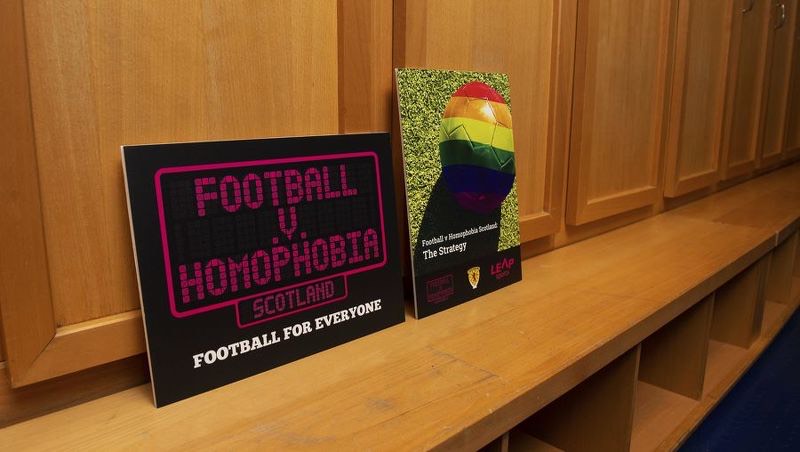 The 2020 publication of the Scottish Football Supporters Survey showed less than half of fans surveyed feel Scottish football is an inclusive place for people of any sexual orientation.

The launch of the E-Learning module aims to combat this statistic and coincides with Football v Homophobia Month of Action which uses the month of February to promote positive action against discrimination based on sexual orientation or gender identity throughout football.

The creation of the E-Learning module was one of the key actions in the Scottish FA’s Football v Homophobia strategy which was launched last year in conjunction with LEAP Sports and Football v Homophobia Scotland. It aims to ensure Scottish football inclusive of lesbian, gay, bisexual, transgender and intersex (LGBTI) people, concentrating particularly on policy and procedure, education as well communication across all levels of the game.

The commitment to support LGBTI participation within Scottish Football is part of Scottish FA’s Football Unites equality framework which aims to ensure Scottish football is reflective and representative of the demographic of Scotland whilst working to remove barriers to participate within the game in this country. This E-Learning module, which can be accessed on the Scottish FA Live system to anyone with a log-in, is the latest education programme to be launched following on from existing modules specialising in mental health and equality.

David McArdle; Scottish FA Diversity and Inclusion Manager: “We are delighted to work in partnership with LEAP Sports and Football v Homophobia Scotland to further educate the Scottish game in LGBTI awareness and support participation. Education is key in striving to ensure there are no barriers to participate within Scottish football and the creation of such a resource will allow for a greater understanding of the challenges faced within the LGBTI community to access our national game.

“The Football Unites; Football v Homophobia Scotland E-Learning module is the third Equality E-Learning provision within the Scottish FA coach education pathway following the launch of the Mental Health Awareness and Equality in Scottish Football which has both proved very successful and we look forward to creating further E-Learning opportunities throughout 2021.”

Sirri Topping; Football v Homophobia Scotland Lead: “The last year has been difficult to meet our football stakeholders face to face but it has allowed us to create online resources and continue to lay the foundations for meaningful change.

“This month of action creates an opportunity for those in football to take a stand against homophobia, to shout about the great work happening in LGBTI inclusion and to reflect on the work still to do.

“With the launch of the Football Unites; Football v Homophobia Scotland E-learning, and more resources in the pipeline, we have a lot to celebrate and be optimistic about. It has been a pleasure to work alongside the Scottish FA towards a Scottish football that is representative of LGBTI people and we look forward to the rest of this journey together.”