There are plenty of ways to make your organisation’s policies and procedures support a more inclusive environment for LGBTI people. Not having the correct policies and procedures in place can open your organisation up to scrutiny. Clear guidance through P&P can help your stakeholders respond in the correct manner to a situation, avoiding possible harm coming to an LGBTI person. Having clear and accessible guidance means that everyone can feel confident in dealing with a situation. Furthermore, it provides the LGBTI person with the comfort that comes from being heard, and having an appropriate procedure in place.

It is FvH Scotland’s vision that no homophobic incident goes unreported. No matter your organisation’s size or impact, you should have clear and robust reporting mechanisms in place. Information on your organisation’s reporting mechanism should be readily available if someone observes or is targeted by homophobia. We see a future where victims and witnesses of homophobia know where to turn to, that they will be supported not interrogated when they do and that their reports will be treated with the utmost sensitivity.

It is also important that reports are acted on in a manner which is supportive of the LGBTI community. A strong response to incidents of homophobia plays a huge role in eradicating its ugliness from the beautiful game and shows that your organisation stands on the side of inclusion. Some people see football as a space in which to make derogatory comments, for these people, practising homophobia will remain a part of their football routine until they are told otherwise. Football is an emotional game, but culprits should know when they are stepping out of line and should be educated on the impact of their words and actions.

Where possible, it is always best to be proactive rather than reactive when it comes to homophobia. It is important that throughout documentation and communications, homophobic language and behaviours are defined and a strong stance against them is clear. Such statements force people to assess their own language and behaviour, rather than waiting until the damage is done. Clear statements also make LGBTI people feel accounted for and safer knowing that homophobia will not be tolerated.

We strive for a future in which trans people are able to gain the same benefits from football as everyone else. Someone’s trans identity does not impact on their role off the pitch, a trans supporter can sing just as loud, a trans coach can motivate just as well and a trans steward can monitor fans just as attentively. In a lot of cases someone’s trans identity won’t affect them on the pitch either. However, because football is categorised as a gender affected sport, trans participation as a competitive player can be limited by certain conditions set by leagues and other administrators. It’s important that your organisation understand these restrictions and remains inclusive outwith the rules of competition.

It is FvH Scotland’s vision that no homophobic incident goes unreported. No matter your organisation’s size or impact, you should have clear and robust reporting mechanisms in place. FvH Scotland 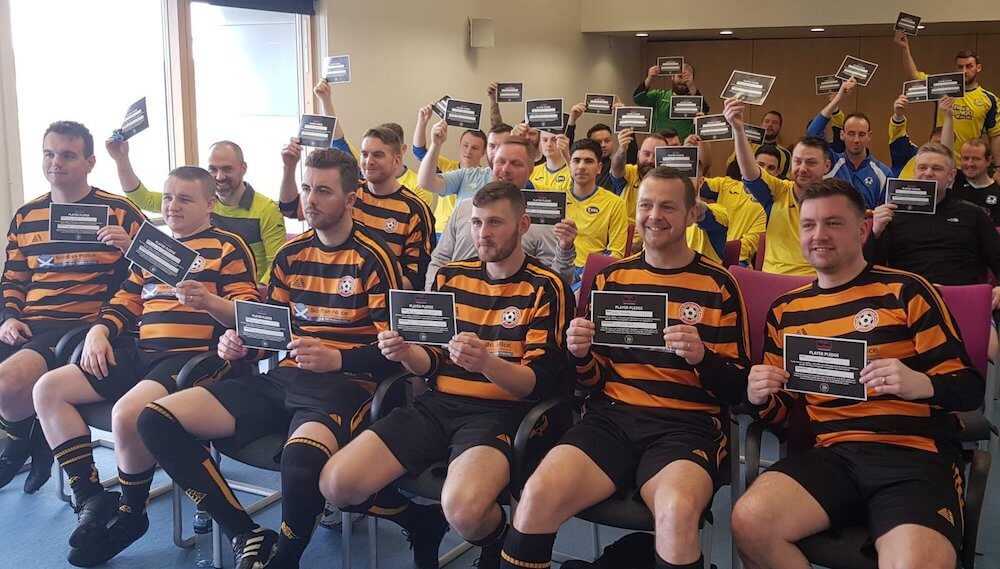