The phrases ‘homophobia in football’ or ‘transphobia in football’ are often used without defining the nature of LGBTIphobia. FvH Scotland works from an understanding that homophobia and transphobia are not uniform phenomena experienced in the same way by all LGBTI sports participants. Homophobia and transphobia can vary in form throughout the different football contexts and cultures – on a continuum from lack of acceptance of LGBTI participants to physical abuse. Forms of homophobic and transphobic discrimination include, but are not limited to:

FvH Scotland recognises that there has been an uptake in the use of terms ‘HBTphobia’ (homophobia, biphobia, transphobia) and LGBTphobia, and fully support this. Although FvH Scotland targets inclusion across the LGBTI community, we use the term ‘homophobia’ as it offers a widely understood and useful frame of reference. Should your organisation you wish to do something more targeted Football v Homophobia also provide a range of options and designs such as ‘Football v Biphobia’ and ‘Football v Transphobia’. 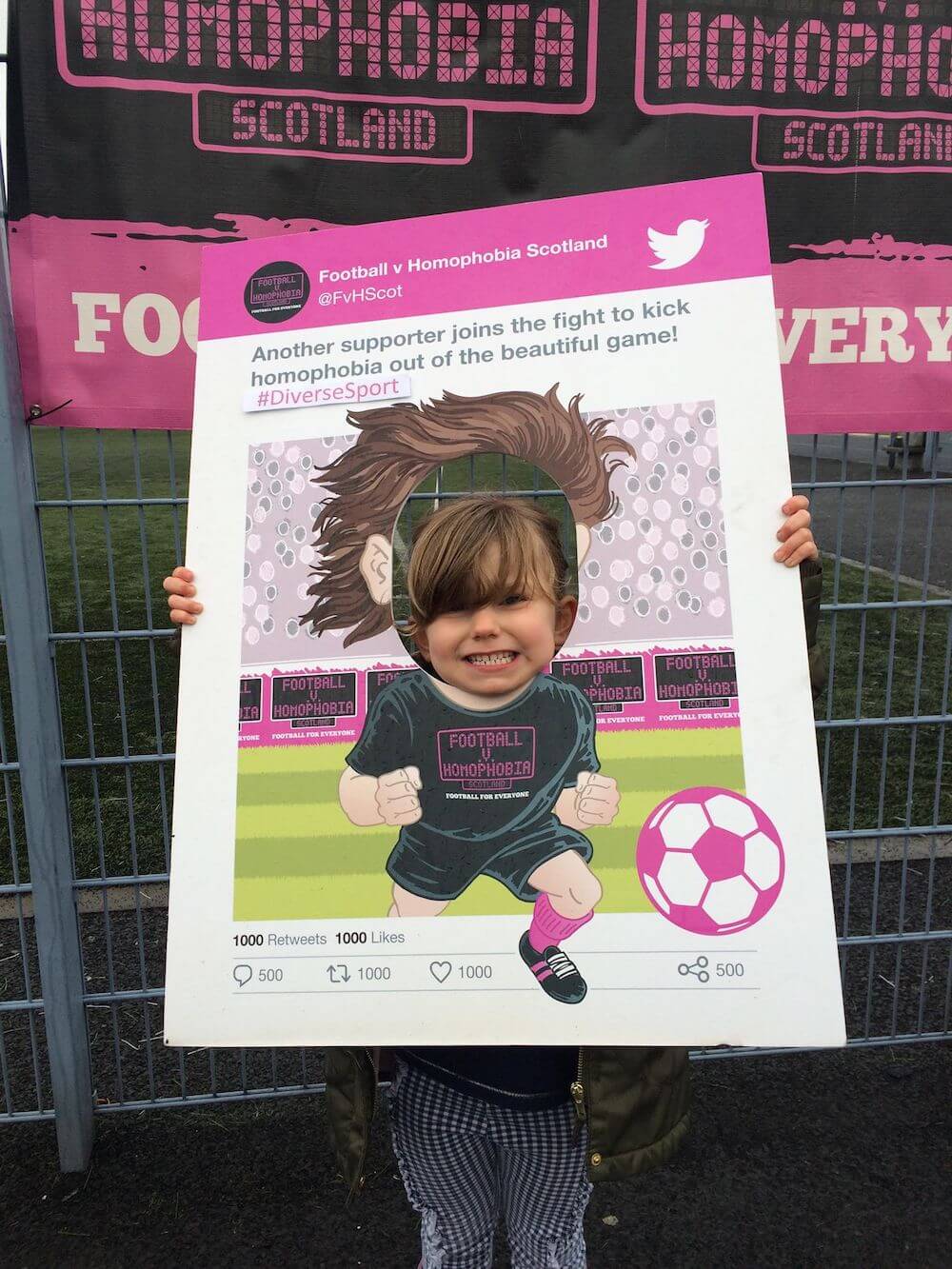 Homophobia and Transphobia in Football

The presence of homophobia in football, and in sport more generally, has been well documented. OutSport research published in 2019 found that In Scotland, almost 88% of respondents considered homophobia, and particularly transphobia in sport to be a current problem. This figure shows an increase from the 2012 Out for Sport findings, where 79% considered homophobia to be a problem in sport, with 66% saying the same of transphobia. The OutSport research (2019) also found that approximately 20% of Scottish respondents active in sport had at least one negative personal experience in the previous 12 months that was related to their sexual orientation or gender identity.

Research undertaken by the National Union of Students in 2012, found that 46.8% of LGBT respondents found their experience of sports culture to be ‘alienating or unwelcoming’. Meanwhile, the Youth Chances Survey (2013) found a third of lesbian, gay and bisexual young people and 50% of young trans people aged 16-25 do not feel they can be open about their sexual orientation or gender identity in a sports club. This is further echoed by OutSport (2019) research where almost ⅓ of Scottish respondents were not out to everyone in their sport. LGBTI people have always been a part of football, however many find it difficult to be honest and open as they fear abuse, discrimination and exclusion. For these reasons, LGBTI people often become ‘invisible’ in football or decide not to participate.

Beyond ‘invisible’ LGBTI identities in sport, almost 1/3 of Scotland’s LGBTI respondents have refrained from a certain sport because of their sexual orientation or gender identity. The sport which respondents from Scotland most often refrained from was football (41%). Although football topped the board across EU countries, this was particularly high in Scotland, with the Scottish figure coming in 14% above the EU total.

Research shows that homophobia amongst football fans is particularly rife. Stonewall Scotland (2016) showed that 82% of Scottish fans who had witnessed anti- LGBT language or behaviour at a sporting event, said that it took place in relation to football. Of all Scottish sport fans, football fans are most likely to encounter homophobic abuse.

Equality Network (2017) carried out Scotland specific research regarding people who had witnessed, or experience homophobic, biphobic or transphobic behaviour at or outside a football venue. 51% of respondents reported having witnessed it, and 15% reported that it had been directed at them personally.

Whilst it is clear attitudes are changing, there is still a widespread problem with homophobic language in football which affects the experience of LGBT people watching, playing, officiating and administering the game. It impacts particularly on the experience of LGBT children and young people in football who may feel especially vulnerable and isolated if they hear negative comments at a time when they are discovering their own identities.