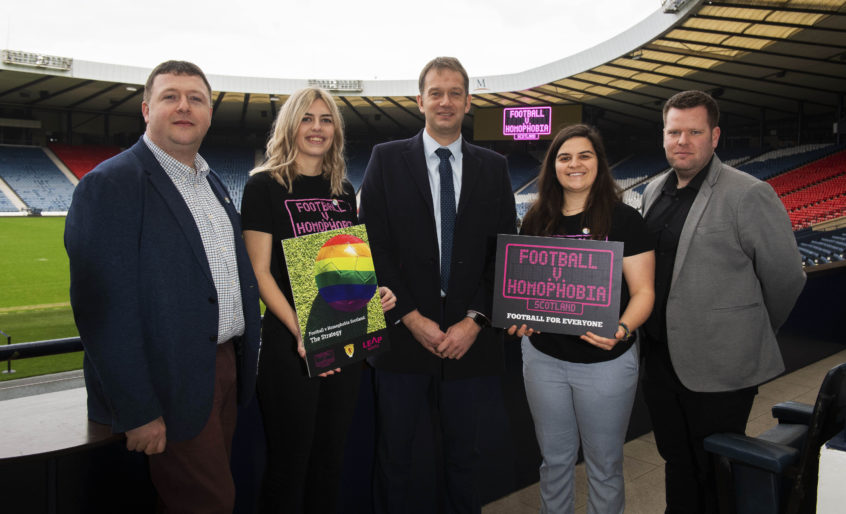 A new national strategy to remove the barriers which prevent lesbian, gay, bisexual, transgender and intersex (LGBTI) people from accessing, participating, enjoying and excelling across Scottish football has been launched at Hampden Park today.

The strategy aims to ensure that Scottish football is equal and fair to everyone and adopts a three-strand approach to creating sustainable change in football: Policy and Procedure, Education, and Communication, and aims to work in all areas and levels of the game.

As part of the strategy, the partners will work with Scottish football clubs to help them update policies and procedures and promote awareness campaigns. An e-learning resource will also be created for those clubs aiming to create an inclusive football environment for LGBTI people.

“Anyone seeking to engage with football in Scotland should be able to do so in a welcoming environment, regardless of their sexual orientation and gender identity. This ground-breaking strategy will help to make Scottish football more inclusive for LGBTI participants and create an environment within our sport that we can proudly state is open to all.

“We have already been recognised for our work in this area with the prestigious Equality Framework for Sports Advanced Level, making us the first Football Association in the UK and one of a very small number of Scottish National Governing Bodies to achieve the award.

“This strategy is the latest step in our drive to ensuring equality is embedded in Scottish football at all levels and we are delighted to partner with LEAP Sports and Football v Homophobia Scotland to create this strategy – the first of its kind in Scotland.”

Hugh Torrance, Football v Homophobia Scotland and LEAP Sports Executive Director: “With the launch of this strategy comes a very clear and intentional message that there is no place for LGBTI-phobia in Scottish football.

“The strategy provides a clear framework for stakeholders to plan change and take action. It’s time to step up efforts and we look forward to supporting the Scottish FA on their journey.”