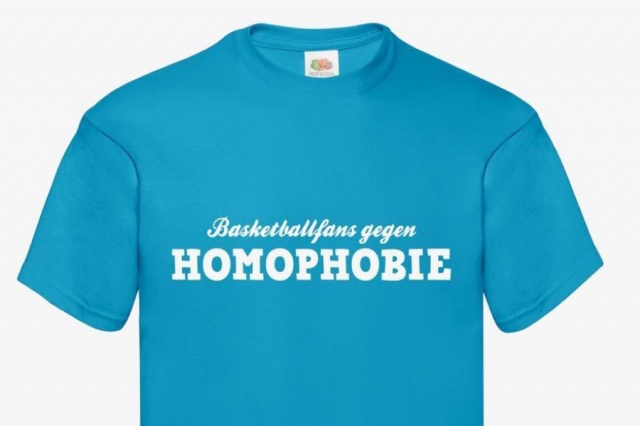 Month of Action activities and info days by Outsport partners.

This February the 10th edition of the Football v Homophobia Month of Action takes place and calls for actions against homophobia in football. The campaign is aiming at making a difference and including LGBTI+ people in football.

Clubs, fan groups and authorities across football can get involved in the campaign by holding events or dedicating games to Football v Homophobia.

Also the Erasmus+ funded project OUTSPORT is using this occasion to raise awareness on homophobia in sport. Activities in the partner countries take place and higlight activities within the sport community against discrimination.

In Austria the initiative “Basketball for Diversity” (Basketball für Vielfalt) starts it’s activities this February: homophobia, sexism and racism do not have a place in this game. As part of a bigger campaign with testimonials of players and activities during basketball matches you can now get T-Shirts and Hoodies with the slogan “Basketballfans gegen Homophobie” („Basketball supporters against Homophobia“) to raise awarness and take a stand against homophobia and towards LGBT+ inclusion in basketball.

fairplay-VIDC is supporting this campaign.

Here at LEAP Sports Scotland we are hosting our annual ten-pin bowling Corporate Cup. Now in its 7th year, the Corporate Cup is a great way for your organisation to get involved, mark LGBT History Month, and support LGBT+ young people. It is also an excellent team building opportunity for your staff or your LGBT network. This year’s tournament will take place at Springfield Quay in Glasgow at 7pm on Saturday 16th February.

As well as taking part, your participation will fund LGBT+ young people across Scotland to take part in our youth tournament

As part of the Football vs Homophobia Month of Action, LEAP Sports Scotland are delighted to launch the Football Carnival for Beginners. The Carnival is bound to entertain and guarantees to be a good laugh, all the while helping beginners to have a go at football. The event will be hosted by iBaller and will involve some carnival style football games and a friendly 5-aside football match and will take place in Glasgow.

The event is for LGBTIQ (lesbian, gay, bisexual, transgender, intersex and questioning) people who are not currently involved in football, and carnival participation is aimed at those aged 16+. However, everyone is welcome to join in.

iBaller is a football-themed carnival with fun based skill challenges that provide people of all ages with an opportunity to test their football skills.

Gaycs together with the EuroGames committee, are going to organize a special football match joining the topic of homophobia and racism. The Team Nazionale Gay will play against Liberi Nantes. Liberi Nantes is an open sport initiative inviting everybody to participate in sports, in particular refugees and migrants who are so often excluded. Everybody jas the right and freedom to join.

As part of the event im Rome a flash mob will raise awarenes on the issues of homophobia and racism on February 20th.